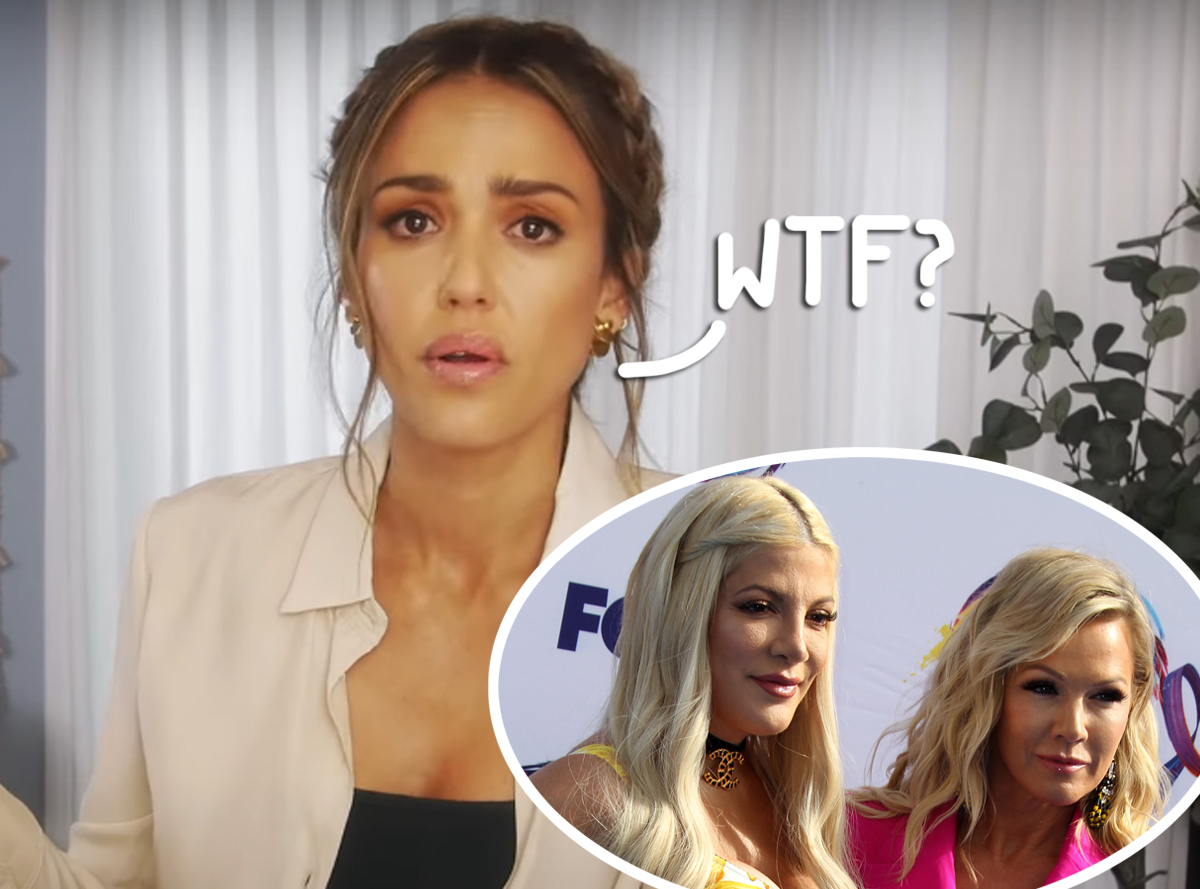 Think the stars who reportedly refuse to make eye contact with their colleagues backstage are bad? Imagine having to film a scene with someone you’re not allowed to look in the eye!

Jessica Alba apparently had to do just that early in her career when she guest starred on Beverly Hills, 90210, back when she was just a guest star and not someone worth looking in the eye, we guess?

Video: Jessica Sobs While Realizing Daughter Honor Is Taller Than Her

The LA’s Finest star made the revelation on Thursday’s episode of Hot Ones. When asked about her early guest roles, she dished about her stint on the ’90s hit:

“I couldn’t even make eye contact with any of the cast members, which was really strange when you’re, like, trying to do a scene with them.”

Wow… how did they even film these scenes then!?

The 39-year-old actress — who played pregnant teen Leanne in two episodes during season 8, which aired in 1998 — explained that she had no choice but to obey the ridiculous mandate, sharing that the Ellen rule was put to her in no uncertain terms:

“It was like, ‘You’re not allowed to make eye contact with any one of the cast members or you’ll be thrown off the set.’”

Color us shocked! But not that shocked, as Alba isn’t the first actor to accuse the 90210 cast of diva-like behavior…

Tiffany Thiessen, who joined the show in season 5, also had issues with her co-stars, particularly Tori Spelling and Jennie Garth. She told Howard Stern in a 2012 interview:

“The girls were not very nice to me.”

Another actress who clashed with the OG cast was AnnaLynne McCord, who starred in The CW’s 2008 reboot of the series. In November 2019, the actress claimed she faced similar icy attitudes from the original cast, telling Us Weekly:

The 33-year-old went on to claim that the original cast belittled the cast of the reboot. She recalled hearing at one point:

McCord did kinda walk back her comments the following month, praising the show to the outlet:

“I’m very grateful that 90210 was what it was in the ’90s because it did give me such an amazing platform… When you’re the first to do it — a teen show like that — that really had [an] impact. I think that they’re going to always be the icons that they are.”

She didn’t exactly change her tune about the cast though…

But hey, divas or not, they’ll always have a special place in our hearts — probably not Alba’s though! LOLz!

Ch-ch-check out the actress’ full Hot Ones interview (below) to see what other kind of tea she spills in between munching on spicy AF wings!