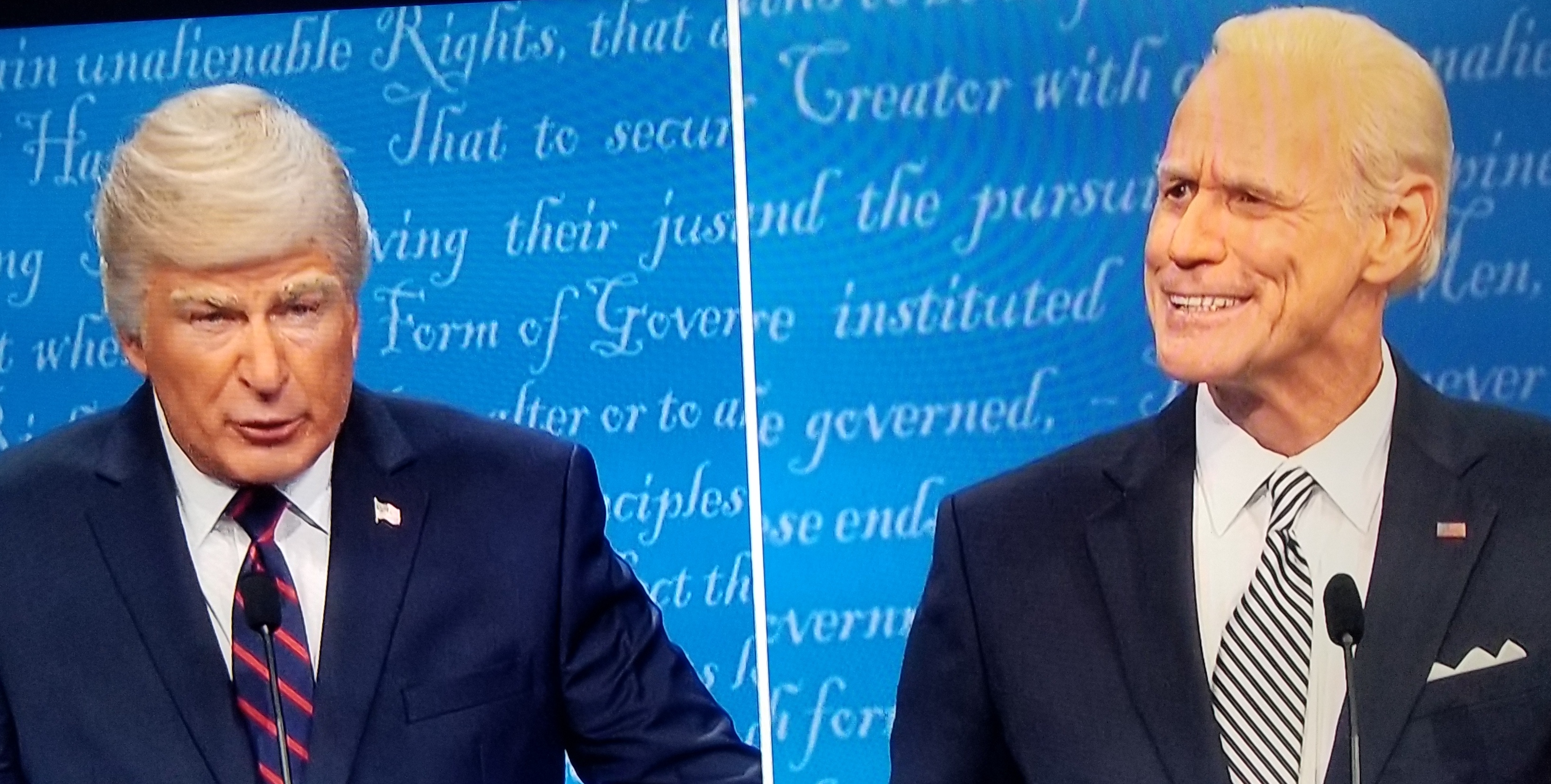 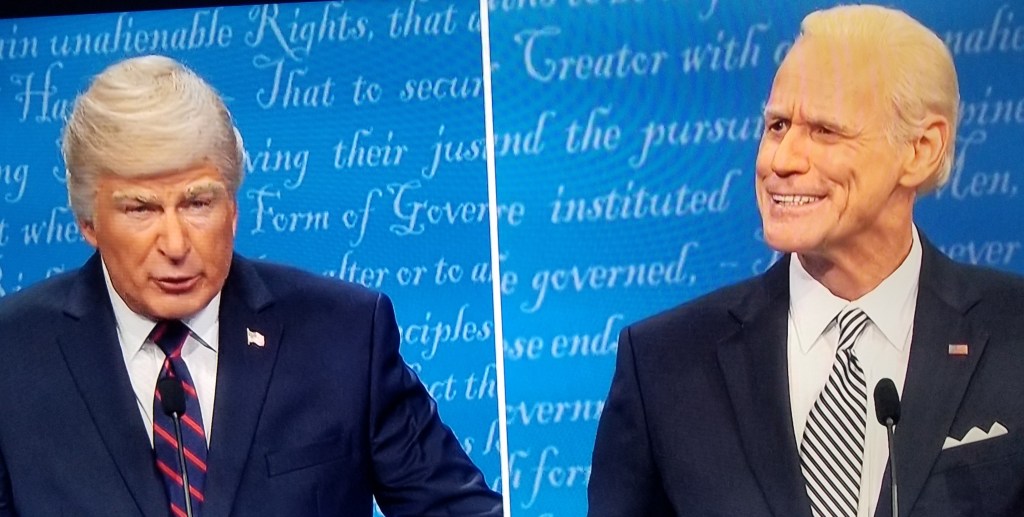 As Donald Trump sits in a military hospital receiving treatment for the coronavirus, Saturday Night Live decided to stick with skewering the first Presidential debate of September 29. “Even though Tuesday felt like 100 days ago” according to the scroll that kicked off the NBC series’ Season 46 debut tonight.

“We thought it was important to see it again, since it might be the only presidential debate,” the white copy on a black background added with a voiceover and laughter. “And it was pretty fun to watch as long as you don’t live in America.”

With that, SNL cut to Beck Barret as failed debate moderator Chris Wallace (“I think I’m going to do a really really good job tonight,” he said to a big laugh) and Alec Baldwin back as the boorish and White Supremacy dog whistling former Celebrity Apprentice host and Jim Carrey going full bladder Joe Biden (love the wig and aviator sunglasses). As expected, Maya Rudolph sauntered on as the ex-Veep’s running mate Sen. Kamala Harris to settle the boys and Wallace in a manner more Vice-Principal than Vice-President.

Or as Baldwin’s Trump said when chastised by Beckett’s Wallace for his first of many interruptions, “tell that to my Adderall, Chris, now let’s get this show on the road and off the rails.”

On the flip, Carrey’s tightly scripted Biden promised not to “let his inner Whitey Bulger come out” and “flash that smile they taught you in anger management.”

The opener had the feel that it went through a lot of drafts given that the fast moving nature of events with the result an opener in which Carrey’s Biden literally used a remote control to stop Trump mid-debate. “America look at me. Look directly into my eyeballs,” Carrey soft sang. “You can trust me because I believe in science and karma. Just imagine. Science and karma can team up to show how dangerous this virus can be. I am not saying I want it to happen. Just imagine.”

Following that, Chris Rock’s monologue took direct aim at Trump’s health condition: “President tTump is in the hospital with COVID. I just want to say, ‘My heart goes out to COVID”

Three days ago, it was assumed tonight’s Chris Rock hosted SNL would clearly open with a squirming of the dumpster fire that was that first and maybe last face-off between Trump and Biden. Literally and figuratively, all the stars had aligned with everyone presuming Baldwin would return, Carrey as a cranky Biden and Rudolph reprising her Harris stint from last season.

Then, hours after his close aide Hope Hicks tested positive on October 1, Trump tweeted out he and the First Lady had COVID-19. Within seconds, the roller coaster that 2020 has been so far went even faster as America screamed WTF? Still the show looked for a middle ground tonight to stay on its own tracks and avoid going solemn.

By the time Trump was flown off to Walter Reed Medical Center yesterday, more and more of the White House and GOP elite also were afflicted with the coronavirus, this vaulted into the gang that couldn’t shoot straight as contradictory information or lack thereof flowed out of official circles. A four-minute video that Trump recorded and posted online was clearly intended to invoke calm, but mainly seemed to lean more into self-made hostage footage of a 74-year old man reading from a teleprompter.

In that easily mined vein, SNL’s political open tonight made a number of references to Trump’s condition including Carrey’s sparky Biden measuring the distance between the podiums and moving his back. However, the swipe that likely stung the most was Baldwin’s Trump’s declaring “that statement is something that will probably come back to haunt me later this week” after he called COVID-19 a hoax.