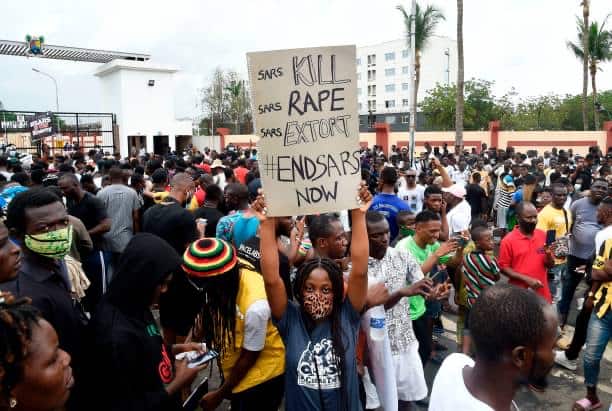 #EndSARS has become a trending topic because young Nigerians have decided to stand up to a rogue police unit. Protesting the ‘Special Anti Robbery Squad’ (also known as SARS) and its profiling of the youth, people have taken to the streets for the past two days to let their voices be heard, according to Quartz Africa.

According to reports, this unit was initially founded in 1992. The intent was to protect civilians from armed robbers, but the exact opposite is allegedly happening. With alleged reports of illegal detentions, murders, and extortion, young adults in Nigeria are calling on the unit to disband.

Many also report that SARS profiles young Nigerians who have locs or dyed hair, piercings, and anything that seems to be of status.

According to BBC, Amnesty found that men between the ages of 17 and 30 were allegedly targeted. “Young men with dreadlocks, ripped jeans, tattoos, flashy cars or expensive gadgets are frequently targeted by SARS,” Amnesty said.

Once they’re profiled, many are allegedly attacked, raped, and even killed.

According to BBC, the hashtag was initially used last Saturday following the alleged killing of a young man by the officers from the SARS unit.

On Sunday, Nigeria’s Inspector General of Police, Mohammed Adamu, banned the SARS unit from setting up roadblocks and search duties. He also reportedly stated they must wear uniforms, while reportedly promising the unit would be investigated.

An investigation by the rights group Amnesty International published in June, accused Sars officers of using “torture and other ill-treatment to execute, punish and extract information from suspects,” BBC reports.

It’s also alleged that there have been 82 cases documented between January 2017 and May 2020.

John Boyega has spoken out about police brutality. He tweeted, “The youth in Nigeria deserve good leadership and guidance. This situation is tied to many other issues. Please lend your attention to this pressing problem! #EndSARSImmediately #EndSARSProtest #EndSars”

‘The West Wing’ Gets A Trailer Remake Featuring The Trump Administration, Courtesy Of Stephen Colbert And ‘The Late Show’
Today’s Kids Will Never Know: The OGs Who Perfected The Art Of Baby-Making Music