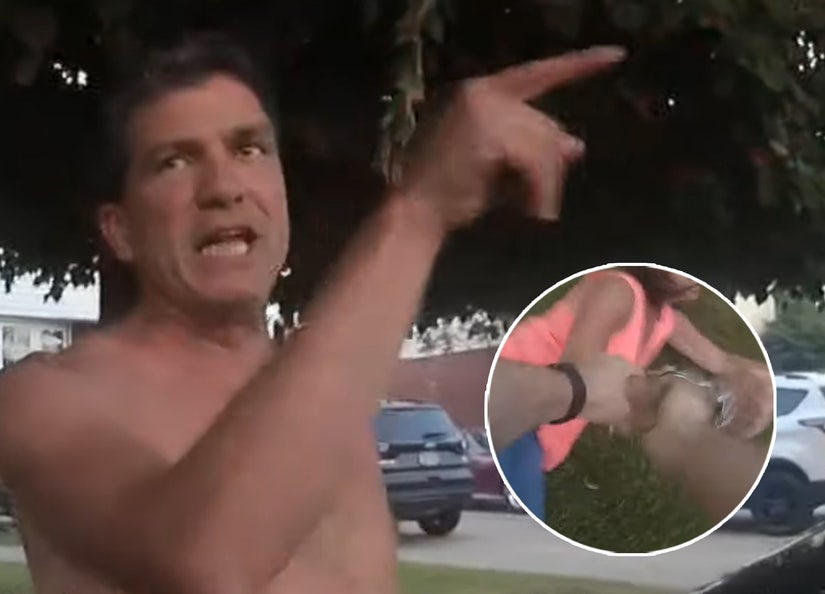 “You arrest my f–king wife you’re gonna be sorry!”

Chaotic footage of the arrest of State Supreme Court Justice Mark J. Grisanti’s wife has emerged — as well as his attempts to stop it.

The New York judge and his wife Maria were both handcuffed and carted away by police on June 8 after an alleged street brawl with their Buffalo neighbors.

But body cam footage released on Tuesday showed just how disorderly the scene was, with Maria dragged to the ground as she was cuffed, prompting her shirtless husband to shove the arresting officer.

The video, which contains plenty of foul language, shows the judge dropping the Mayor’s name, telling the officers that his kids are cops too, and warning: “You better get off my f–king wife.”

The footage shows the officers arriving on the scene as the neighbors scream abuse at each other in the middle of the street.

The judge complains that they “ripped my friggen chain off”, while his wife bellows they are “a bunch of f–kin a–holes”; while the neighbors insist that the couple are drunk.

The two women get right in each other’s faces and look ready to exchange blows before one of the officers intervenes and separates them.

The cop warns it’s “going to be a problem” if she doesn’t settle down” but the defiant Maria shouts back “I don’t care! You’re not gonna arrest me!”

“I sure f–king am,” the cop replies, matching her tone as he sprints across the street to wrestle her into handcuffs. She falls to the ground in the scuffle, which is when the judge runs over and shoves the officer off her. 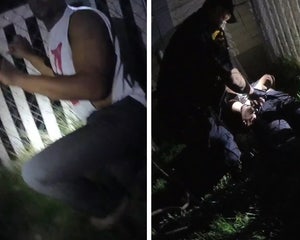 “Dude — listen: my daughter and my son-in-law are both police officers,” the judge — who also served as a New York State Senator for three years — tells the officer.

“I know, and you would not want somebody putting their hands on them,” the officer reasons, informing the judge his wife is staying in cuffs.

“Hey! You arrest my f–king wife you’re gonna be sorry!” the judge warns, reiterating his kids are cops. “Oh my God are you f–king kidding me dude?”

“If you don’t get the cuffs off her right now, you’re gonna have a problem.”

In the second body cam video, Grisanti tells the officers he’s “good friends” with Mayor Byron Brown, tells the cop he “didn’t mean to tackle” him, then attempts to offer some “constructive criticism” not to throw people’s wives on the ground, before one of the cops — Officer Richard Hy — loses patience.

“Let me give you some constructive criticism: You wanna drop another copper’s name? You want to scream about [how] you know [Deputy Police Commissioner Joseph] Gramaglia or the mayor? Why don’t you shut the f–k up and you keep it quiet? Shut your goddamn mouth.”

When the judge doesn’t shut his mouth, the officer spins him around and slaps him in handcuffs too.

Waving a finger in his face, Hy continues to shout him down: “Let’s be quiet dad so the son can get some words in!”

He accuses him of dropping everybody’s name and looking for special treatment: “How does that look like to everybody in this environment right now? It doesn’t look good. And then you grab him? What do you want me to do? Why are you still over talking me,” he asks, before telling the judge as he leads him away: “You smell like cheap beer.”

The row was reportedly triggered over a parking space dispute; the neighbors accused the judge’s wife of punching and biting them before the police arrived.

Shortly after the arrest, Erie County District Attorney John J. Flynn Jr. announced that after reviewing the incident, nobody would be charged.

Justice Grisanti’s attorney Leonard D. Zaccagnino told WKBW his client was trying to defend his wife, and feels his actions are being taken out of context.

“Certainly he’s not happy about it,” he said. “Certainly he wishes the incident never occurred.” 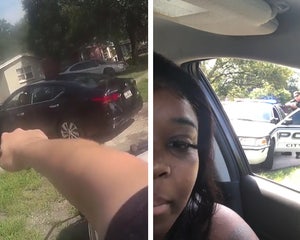