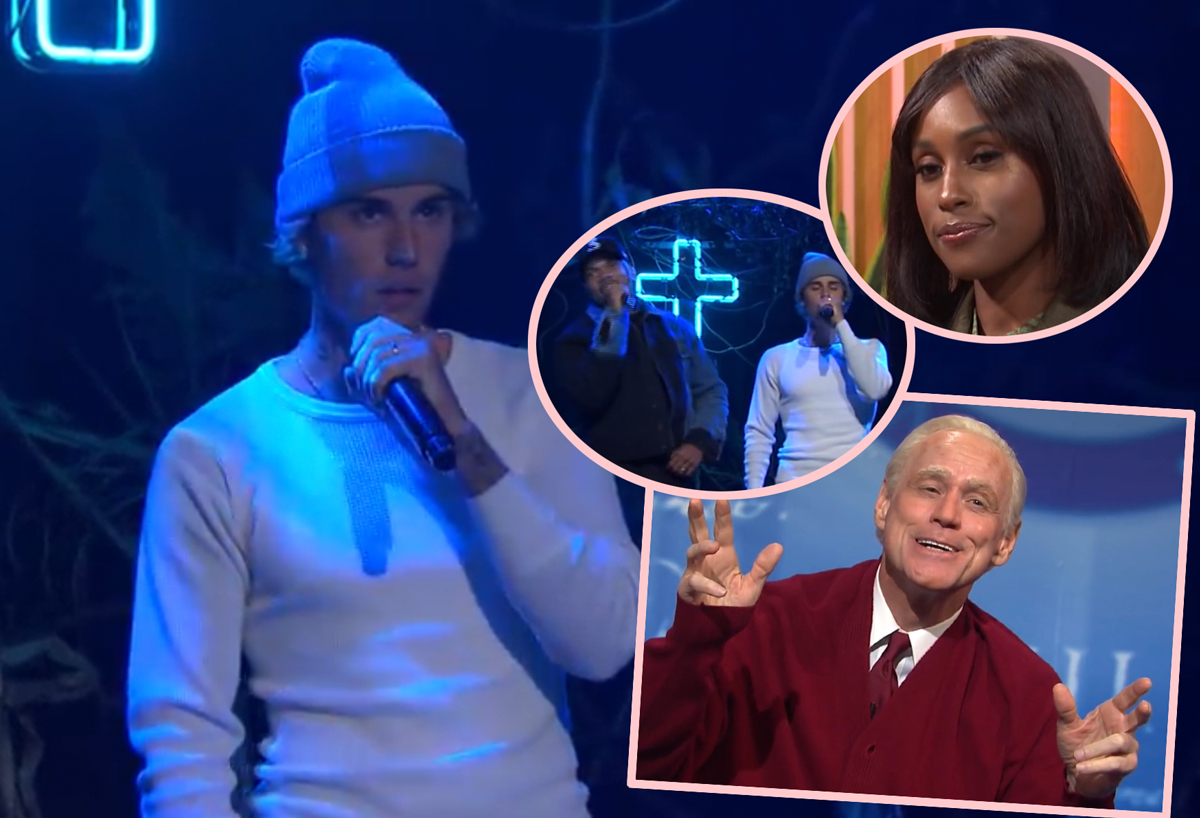 Justin Bieber took us all to church for his stint as a musical guest on this weekend’s Saturday Night Live!

During the episode, hosted by Insecure‘s Issa Rae, the 26-year-old pop star likely made Beliebers everywhere shed a tear through both of his emotional performances, starting with a beautiful live rendition of his track, Holy featuring Chance The Rapper (above).

Visibly moved by the gospel-themed lyrics, Justin closed his eyes and beat his chest several times while singing and at the end, he was left speechless while bent over on his hands and knees trying to compose his emotions. With a bright blue cross hanging behind the performers on stage, you’re bound to feel something watching the clip (below).

Hailey Bieber‘s husband kept the powerful vibe going with his second performance of the night to his latest single, Lonely. Breaking away from the norm, the unique number began in his green room (instead of on a stage) as he sang the painful lyrics while a camera followed him backstage through the halls of the studio. The set ends with him standing in front of the audience who responded with resounding applause.

The Canadian artist has been so emotionally vulnerable with his music lately and fans definitely appreciated what he brought to the table on Saturday night. Grab a box of tissues before you check out the video (below):

Wow, we got chills. Love it! And as we mentioned up top, fans loved it too and made the Biebs trend on Twitter for most of the morning after with supportive comments like these:

this is what we look for in artists. realness. and this is what justin bieber has. he’s pure. pic.twitter.com/Wngs3oZiy6

Of course, this is still one of the funniest shows in late-night television, so the evening continued with plenty of the slapstick humor we’ve come to expect from the gang! Jim Carrey returned to play his version of Democratic presidential nominee Joe Biden and Alec Baldwin reprised his infamous Donald Trump impression to mock both men for holding simultaneous town hall appearances that were held on NBC and ABC, respectively, on Thursday.

The sketch switched back and forth between both events and really seemed to hit all of the right notes! Carrey’s Biden described the vibe they were going for as a “poorly attended college lecture” while Baldwin’s Trump spent his town hall segment defending abusers like Jeffrey Epstein, dodging questions about QAnon, and scoffing at conspiracy theories.

The differences between the candidate’s temperaments couldn’t be any clearer by this interpretation! The American people are now facing the choice between someone who gives off sleepy Bob Ross vibes and an idiot who’s better suited for an episode of Wrestlemania. It’s a hilarious hot mess that’s worth checking out here:

Quite the funny woman herself, it’s surprising that it took this long for Rae to step in as the host and of course she joked about that exact point during her opening monologue!

Later, she drew hearty laughs portraying a woman trying to date during the coronavirus pandemic and a Chicago news anchor who definitely isn’t writing Kanye West in on her ballot this year!

Ha! That last bit about the Yeezus creator really struck a chord because he responded to the very clear, “F**k Kanye” jab on Twitter early Sunday morning. He tweeted out a photo of Google search of the HBO actress’s name, along with a message that he would be “praying” for her:

Ive always said SNL uses black people to hold other black people back My heart goes out to Issa Rae I’m praying for her and her family I know that the twenty years of service that I’ve paid in the entertainment field has furthered our ability to be more successful pic.twitter.com/kExwUVVsqv

Oop! Obviously, someone is feeling salty about that one but FYI, it doesn’t give him the right to suggest he paved the way for her career or something. Get real, dude.

Perezcious readers, did what was your favorite part of this weekend’s skits? From the timely election coverage, the much-needed laughs from Issa, and the way JB made us ugly cry with his music, we’d say this wasn’t too bad — but we want to hear from you! Sound OFF in the comments.