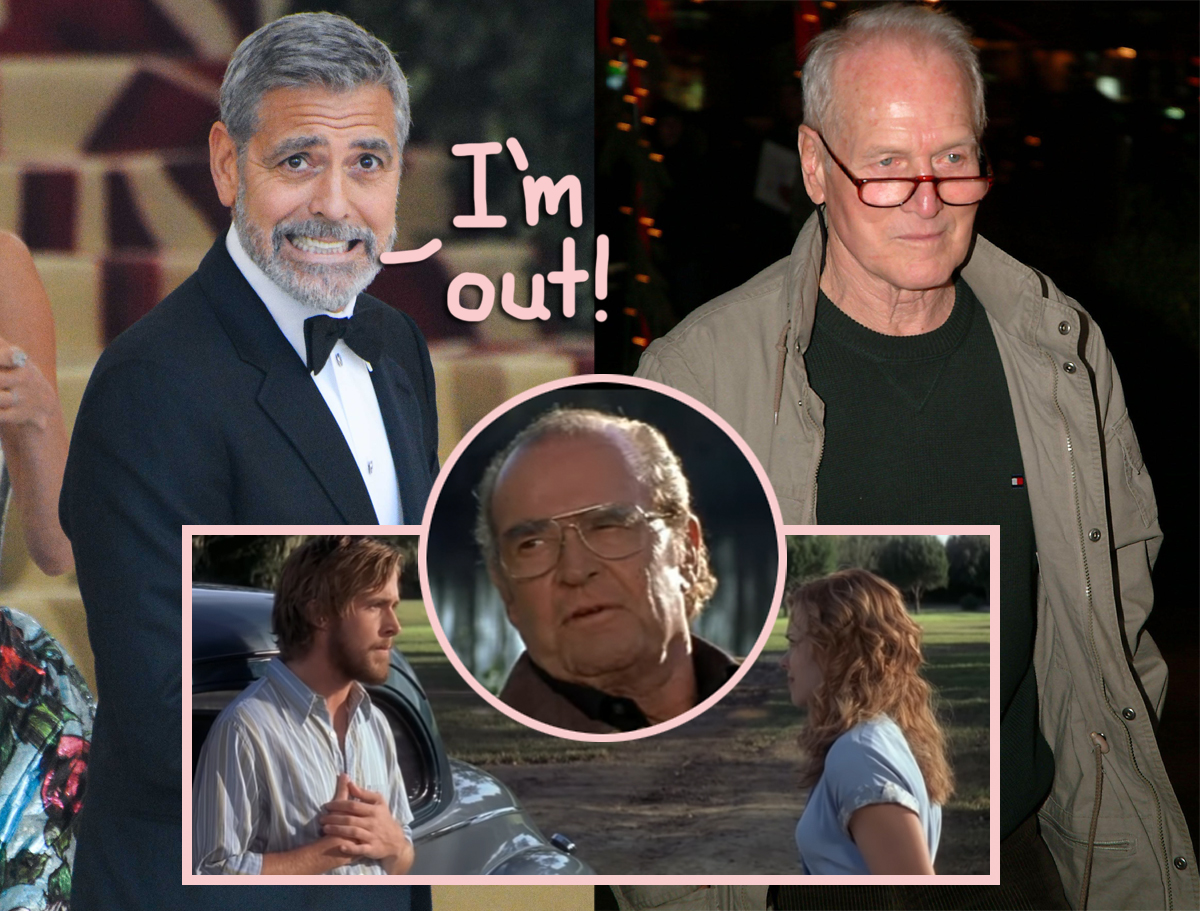 Just imagine if things had turned out like this for The Notebook… what a totally different film it would’ve been!

This week during a promotional chat about his newest film, The Midnight Sky, superstar George Clooney let slip that way back in the early 2000s he and legendary actor Paul Newman both nearly joined the cast of the iconic Nicholas Sparks romance film!

Seriously — can U even imagine Clooney as the leading man in The Notebook?! In place of Ryan Gosling?! Come on!

Related: Clooney Calls Out The Media For Being ‘Unfair’ To Meghan Markle!

The beloved 59-year-old actor revealed this super-juicy tidbit during a virtual chat for the 64th BFI London Film Festival, where he recalled how he regretted being unable to work with Newman before the iconic actor passed away at 83 in 2008 after a long battle with cancer. A truly sad fact, but it does seem things worked out as they were meant to — as the movie became the love story of a generation, thanks in no small part to its cast.

We’re sure Clooney would have been fine, but RyGos and Rachel McAdams had chemistry to spare! (Though offscreen was apparently a different story…)

Explaining his unlikely connection to the North Carolina-based film, Clooney recalled how he and Newman met in person, decided on a plan, and were both ready to go all in on Sparks’ romance novel-turned-love story movie as a way to work together on something!

Per Deadline, the ER alum recalled:

“We were going to do The Notebook together. Basically, I was going to play him as a young man, and it was funny. We met and said, ‘This is it. It’s going to be great.’ But [Paul] is one of the handsomest guys you’ve ever seen. We met up [again] later and I said, ‘I can’t play [a younger] you. I don’t look anything like you. This is insane.’ We just wanted to do it because we wanted to work together, [but] it ended up being not the right thing for us to do.”

Wait… so Clooney turned down a role because he wasn’t good looking enough?! Who ever knew Clooney to turn down any good leading role, let alone because he was self-conscious about his looks?! What kind of bizarro world are we living in right now???

As it turned out, Gosling played the heck out of lead Noah Calhoun, with longtime character actor James Garner taking on the older version of the man — that was initially set to be Newman’s part. And of course, McAdams’ work opposite Gosling as Allie Hamilton, and Gena Rowlands‘ work as the elder version of Hamilton, were just as superb. So things worked out in the end!

Still, now we are forever going to wonder what Sparks’ mega-hit movie would’ve become had Clooney and Newman stuck around to see it through. Ah, the road not taken…

Reactions, Perezcious readers? What would The Notebook have been like with Clooney acting in the spot Gosling ended up making famous?? Better or worse?! TOTALLY different, regardless, right??

Sound OFF with all your opinions and reactions, down in the comments (below)!!!

Power Star Janis Dardaris Sues Dogsitter’s Boyfriend After Her Pets Are Tortured and One Killed
Tori Spelling Recalls Being Bullied Over Her Looks, ‘Hurtful’ Comments About Her Eyes