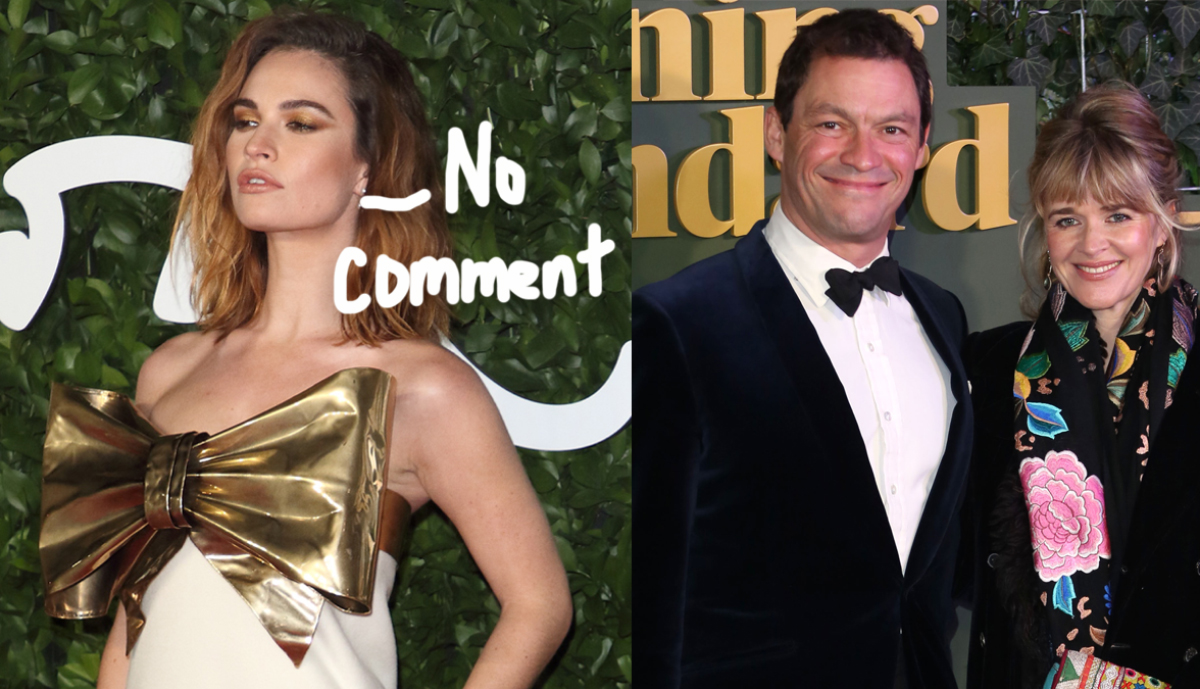 Amid the fallout from a headline-making romantic encounter with her married co-star Dominic West in Rome last week, the 31-year-old actress has reportedly canceled not one but two (wait, possibly three?!) appearances scheduled for this week.

According to DailyMail.com, Lily was set to appear on the Today show as well as BBC‘s The Graham Norton Show on Monday, October 19 — but sadly, those audiences will be disappointed!

According to a press release obtained by the outlet, James was supposed to appear on both interview shows to promote her new Netflix film, a remake of the Alfred Hitchcock classic Rebecca, in which she co-stars with Armie Hammer. The decision for both lead actors to skip their duties on the NBC series came down on Friday and just a day later, Norton’s crew was also notified that a solo Lily would not be joining their show, either. Co-star Kristin Scott Thomas took her place instead, with the English network confirming that she would “appear on the show at a later date.”

Um… what does Armie have going on? Does he also not want to talk about his headline-making love life??

The original release for the BBC program (below) has since been revised to reflect the changes we just described, but it sounds like this would’ve been a great episode! It said:

‘The BAFTA-award-winning talk show featuring the biggest celebrities and the brightest conversation on television. Among the guests in the studio and on video call: rock legend Bruce Springsteen, promoting his new album Letter To You; British star Lily James, in the new Netfllix adaptation of Rebecca; Oscar winner Matthew McConaughey, talking about his memoir Greenlights; and musical guest Sam Smith, who chats and performs their current single Diamonds.”

Additionally, Page Six noted the Cinderella star was also slated to appear on Jimmy Fallon‘s Tonight Show on Thursday, but it’s unclear what became of her involvement with the televised late-night special. So, that’s technically three cancellations if you’re keeping count like we are!

As we mentioned earlier, this all comes one week after Lily and Dominic enjoyed a scenic date in Italy together; photographers spotted them riding on a scooter through Rome, and a wedding ring-less Dominic appeared to at one point lean over and kiss Lily’s neck while they were out to lunch with their mutual talent manager Angharad Wood. They are said to have stayed in a hotel suite together at the Hotel De La Ville and new reporting from The Sun claims they were acting very flirty on their flight into town before cameras later caught them out and about!

A source alleged that James and West were extremely cozy, “kissing and cuddling” and “all over each other” while traveling, adding:

“At first, I thought she was his daughter, as I knew he was around 50 and you could tell she was a lot younger. Within minutes of the plane leaving, they began kissing and cuddling after both removed their masks. They looked like a couple heading for a dirty weekend and they were all over each other. They were French kissing and there was a lot of necking going on.”

Wow, that’s quite a salacious account right there! Did “snog-gate” actually go down in Economy with common folk around to see? Or did someone in First Class just get front row access to this piping hot tea?! Apparently, Lily was also seen resting on Dominic’s shoulder at one point, before boarding their flight. Nothing low key about that at all! We’ve heardshe may have actually called West’s wife Catherine FitzGerald shortly after the news broke to smooth things over…

But of course if that went well, you’d think she could face Graham Norton! LOLz!

With everything else we know so far, this new information, and whatever else might still come out about the scandalous rendezvous, it totally makes sense why the film star is dodging face time with the press right now. She can’t hide forever, though! At least, that’s the notion West and FitzGerald must have realized when they tried to get ahead of any narratives with a united press conference of their own where they insisted their marriage was “strong.”

Perezcious readers, we’ll be anxiously awaiting for the starlet to publicly break her silence on all of this, but in the meantime, share your thoughts with us (below) in the comments!