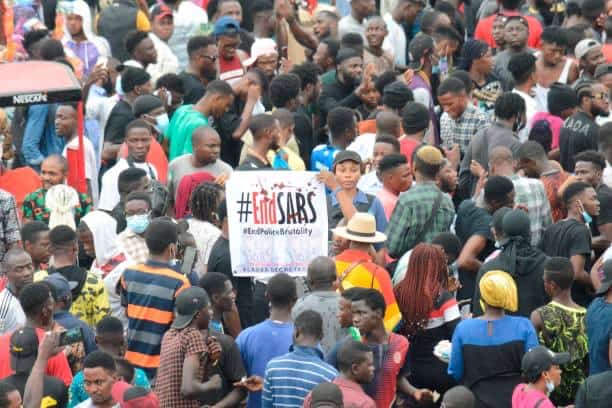 On Tuesday, the governor of Nigeria’s commercial hub Lagos, Babajide Sanwo-Olu, issued a 24-hour state-wide curfew in response to the growing #EndSARS protests. In a tweet, he wrote in part, “I, therefore, hereby impose a 24-hour curfew on all parts of the State as from 4pm today, 20th October,2020. Nobody, except essential service providers and first responders must be found on the streets.”

Shortly after, it appears shots were fired at protesters.

While many at the Lekki Toll Gate were protesting, gunshots were fired, and many people can be seen in videos running frantically to protect themselves. People also went live on Instagram, including DJ Switch and showed the chaotic scene of people who were injured, covered in blood, and running for cover.

There have also been reports of fatalities, but we cannot confirm the number of people who may have been injured, at this time. There are also unconfirmed reports that the lights were cut off amid the protests, and ambulances are blocked—preventing them from helping those who are injured.

As we previously reported, the ‘End SARS’ protests started nearly two weeks ago.

According to reports, this unit was initially founded in 1992. The intent was to protect civilians from armed robbers, but the exact opposite is allegedly happening. With alleged reports of illegal detentions, murders, and extortion, young adults in Nigeria are calling on the unit to disband.

Many also report that SARS profiles young Nigerians who have locs or dyed hair, piercings, and anything that seems to be of status.

According to BBC, Amnesty found that men between the ages of 17 and 30 were allegedly targeted. “Young men with dreadlocks, ripped jeans, tattoos, flashy cars or expensive gadgets are frequently targeted by SARS,” Amnesty said.

Once they’re profiled, many are allegedly attacked, raped, and even killed.

Donald Trump Cuts Short ‘60 Minutes’ Appearance, Tweets Video To Mask-Shame Lesley Stahl
What Lea Thompson Did With Her Prosthetic Breasts From Back to the Future Part II