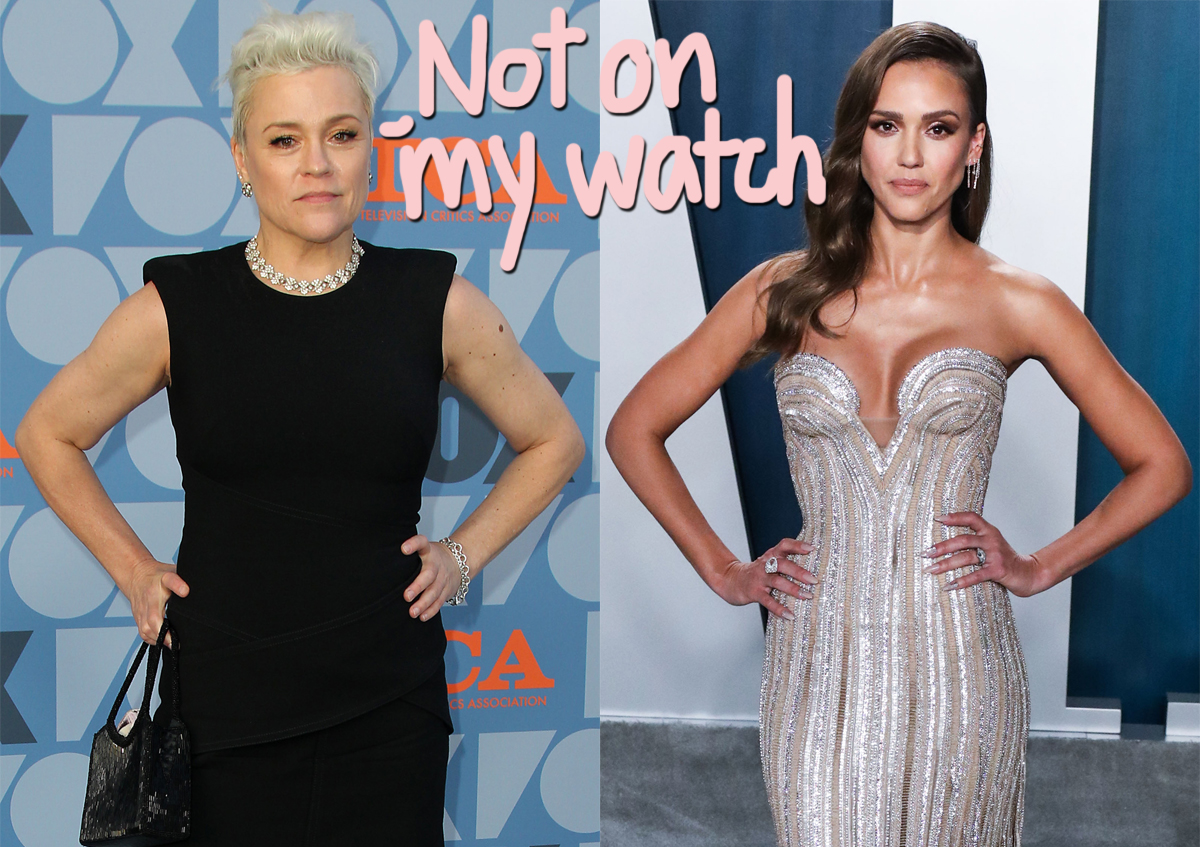 ICYMI, the drama began earlier this month when Jessica Alba claimed she wasn’t allowed to make eye contact with the Beverly Hills 90210 cast when making a guest appearance on the iconic show. Specifically, she said on her Hot Ones appearance:

Wow, right? What a bunch of divas! However…

Related: Jennie Garth, Who ‘Had All The Scenes With Her,’ Weighs In

Much of the OG cast has responded to the accusation at this point, and while they’ve all denied their set being such an unwelcoming place, most have diplomatically agreed that someone must have told Jessica that.

Enter Christine Elise, who was NOT so polite in her response. (The actress appeared in 12 episodes of the original series and returned for the BH90210 reboot.) On a recent episode of the Beverly Hills 90210 Show, she popped off on Jessica Alba, saying:

“Is she f**king insane? There’s no way. … [Producer] Paul Waigner did say, ‘The girls may not be nice, the guys might not be nice,’ but that’s as bad as it got! That cast is very nice and if they don’t like you, they go away. That whole ‘don’t make eye contact’ is — I’m gonna call it what it is — it’s a f**king lie.”

Funny that she’d admit to being warned about the casts’ mean streak, though. Brian Austin Green would probably take issue with that claim, as well. In an earlier appearance on Sirius XM’s The Jenny McCarthy Show, he reacted to the Fantastic Four star’s story, saying:

Related: Tori Spelling Remembers Being Bullied For Her Looks On 90210

For what it’s worth, Christine did walk back what she said, releasing a new statement on Thursday via her Instagram:

“If you have thoughts on this unfortunate article – please read this:
I just want to comment on the article today where I was quoted as calling Jessica Alba a liar.
First of all – I have never met her but have always admired her work. I am certain she is a lovely woman.
Secondly, anyone who knows me at all knows I swear with unapologetic abandon, so quotes read without tone of voice can be misinterpreted and seem more angry than they ever were.
That said, JA was quoted as saying she was told not to make eye contact with the cast or risk being thrown off the set.
That does not sound like the set I was on – and, though I was only in a handful of episodes, I wrote for the show & lived with Jason at the time so – had any such culture evolved on that set – I feel certain I would be aware of it.
Some of the other cast members have gone on record – agreeing with me that they never knew of anything like that going on during the run of the show. They were more diplomatic than I was, however.
I just want to say that it BAFFLES me that any controversy at all can be worked up over a show that went off the air 20 years ago. Perhaps she was misquoted or the remark was taken out of context but – left unanswered – it implies that the entire cast engaged in unprofessional diva behavior & that they were unwelcoming to guest stars. I think that is an inaccurate & unjust representation of a lot of people I consider to be my friends.
The fact remains that maybe someone – an extra or whatever – delivered that warning to her. That does not mean it was, in fact, something the cast demanded.
So, I regret calling her a liar but, more importantly, I regret jumping into this sandbox. What a sad state of affairs that the cast members of a beloved show that premiered THIRTY YEARS AGO are still fodder for ancient history gossip – about things that allegedly happened nearly 25 years ago.
I am embarrassed about my part in this.
Apologies to Jessica Alba.”

What do YOU think really happened back then?! We’re sure The Honest Company founder regrets she ever said anything at this point! We definitely know Miz Elise does…